As cities increasingly engage with Blue-Green Infrastructure (BGI) in the context of urban climate adaptation and regeneration, it becomes ever more pressing to robustly assess their hydraulic performance but also to develop smarter ways of managing them in real time.

Some examples of BGI include rain-gardens, bioretention cells, green and blue-green roofs, permeable pavements, Sustainable Drainage ponds and managed wetlands. While these features are developed at different scales, from the individual building through to city scale, what is common among these infrastructural options is the fact that they leverage the natural processes of attenuation and infiltration. This is the opposite approach to what we are used to seeing in cities, i.e. impermealizing the cityscape and building underground pipes that collect stormwater to drain the city as fast as possible.

While BGI clearly appears attractive and delivers multiple socio-environmental benefits, the paradigm shift from the drained city to the sponge city will not become a reality until we demonstrate that BGI works and actually works better than traditional grey infrastructure with regards to flood risk reduction. To date, engineers feel very comfortable modelling the hydraulic performance of pipe networks in drained cities (see Figure 1); this is not yet the case for sponge city BGI.

Figure 1: Example of sewer network with different manholes under flood condition during a storm event at a South London sub-catchment (own data)

Against this background, this article focuses on the assessment of the hydraulic performance of Blue-Green roofs in the City of Amsterdam, as a state-of-the-art BGI. It aims to answer questions relating to the level of flood risk mitigation they offer. Based on this discussion, it is easy to draw parallels to other decentralised BGI options which can be used as alternatives or in combination to BG roofs.

Understanding flood risk mitigation potential offered by the roofs becomes easier if we breakdown the problem to some simple questions:

The first step to understanding baseline flood risk is collecting historical flood information. Where flooding happens is a useful information to have. We also need to establish the associated storm intensity (i.e. precipitation depth for a specific duration) and return period, i.e. frequency of event occurrence.

One then has to understand how water behaves within the sub-catchment under evaluation. A few possibilities exist:

One possibility is that water just didn’t have enough time to infiltrate and created localised flooding.
Alternatively, as happens in many cases, water arises to the surface at the location that is most prone to flooding: as precipitation converts to runoff upstream, it is routed overland or in pipes towards that vulnerable spot. As runoff is too much for those pipes to carry, water will surface through manholes and storm drains (see Figure 2). Typically, this will happen at the flatter areas of the catchment.
Another case is when runoff in pipes find a constriction or bottleneck and water backs-up.
Figure 2. Pipe flow from left (upstream) to right (downstream): example of downstream manholes at initially normal conditions (partial flow), then becoming surcharged (full flow) and finally flooding above ground (green line) during the development of an extreme storm event (Data: own model in South London)

These different possibilities for flood occurrence can be modelled in urban flood simulation software. The choice of software varies depending on the degree of detail required, type of problem, computational effort, area covered, spatial and temporal resolution of available data among other factors. Typically, a distinction is made between 1D models of the underground system, and 2D models for the surface component. 1D models are simpler, and can be used to identify capacity problems for instance for manhole locations. The US Environmental Protection Agency provides a (free) solution engine on which several other simulators are based.  Coupling 1D/2D allows for modelling the resulting surface flood from this capacity exceedance. For instance, Infoworks ICM is used by Waternet, the water authority in Amsterdam and partner in the RESILIO project, as in the example shown in Figure 3.

Such software is vital for assessing the contribution of BGI in alleviating the pressure from the sewer network (see further down). 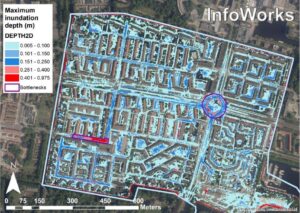 Figure 3: Inundation depths and bottleneck locations (in purple) during Rainproof event in Slotermeer [1] Accounting for the impact of climate change on the baseline

While an area might be at low flood risk today, as demonstrated through modelling and absence of historical flooding, this is not necessarily the case for the future. Running simulations for the impact of future climate scenarios (low/medium/high) on precipitation patterns can shed light on potential future flood prone areas.

The next stage is identifying suitable sites for the implementation of blue-green roofs. The selection is based on a number of criteria, e.g. the size and slope of the roof, the location of the building to make sure retention would make sense there (see next step), or even the alternative BGI options in the vicinity of the building. Cost of retrofitting as well as maintenance issues/costs are also critical. A multi-criteria GIS-based analysis can yield quick assessment results. An example of such a GIS-based quick assessment is shown in Figure 4, where slope, size, year of build, and ownership yields different suitable areas. Such a quick scan should always be followed by a detailed building-level assessment, but provides a first indication of suitability of BGI. 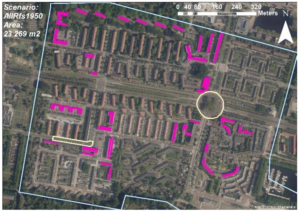 Figure 4. Quick scan of suitable rooftops for BG roofs. The quick scan selected all roofs build after 1950 with a suitable slope and size [1]

Quantifying the contribution of blue-green roofs

This is the most critical part of the assessment: against the baseline, RESILIO explores what is the potential impact of the Blue-Green roofs. Without even performing any modelling, it is clear that there is direct benefit from water retention at the rooftops. Through retention the building “does its part” with respect to net contribution, also known as release at the greenfield rate (i.e. contributing stormwater to the network no more than if the building was not there at all). It is noted that a BG roof performs much better than a green roof; this is because it has higher storage/retention capacity, and is more responsive (i.e. infiltration rate is not a limiting factor). Figure 5 shows an analysis of how extensive BG roof coverage could contribute to flood volume reductions in the Slotermeer neighborhood in Amsterdam, one of the focus areas of the RESILIO project. 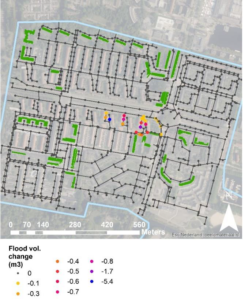 However, it is likely that a few roofs combined together can do more than just have zero net contribution: they can potentially protect the neighborhood from flooding by reducing the pressure to the sewer network. For this broader benefit one needs to carry out more detailed modelling analysis. The integrated modelling of BGI and Grey infrastructure has been demonstrated recently for a sub-catchment in South London [2] but also the US EPA provides clear guidance on how BGI components can be modelled [3].

Beyond the multiple benefits of the RESILIO roofs, the project’s approach goes beyond state-of-the-art by supporting the hydrological cycle through real time control. Within the RESILIO project, it is investigated how precipitation forecast can be used to drain water from the roof to create buffer capacity for the incoming rainfall, without compromising water availability for the green layer. After capturing the peak of the rainfall event, and when sensors in the drainage system indicate sufficient capacity, the water can be slowly released from the roof into the drainage pipes. Compared to conventional (green) roofs, this distinct smart feature of blue-green roofs boosts the effectiveness in capturing the peak of the rainfall event.

In dry periods it is crucial to keep the blue-layer closed and save all water on the roof to increase the chance of the roofs’ vegetation to survive the drought.

The RESILIO project is under way to demonstrate the impact of its implemented roofs but also to establish how a future with more RESILIO roofs will look like. The potential to reduce flood risk through upscaling is to be demonstrated. So do stay tuned!